Andrea and Brad’s Summer Wedding Ceremony at St. Martin of Tours with Reception at the Western Reserve Historical Society in Cleveland, Ohio 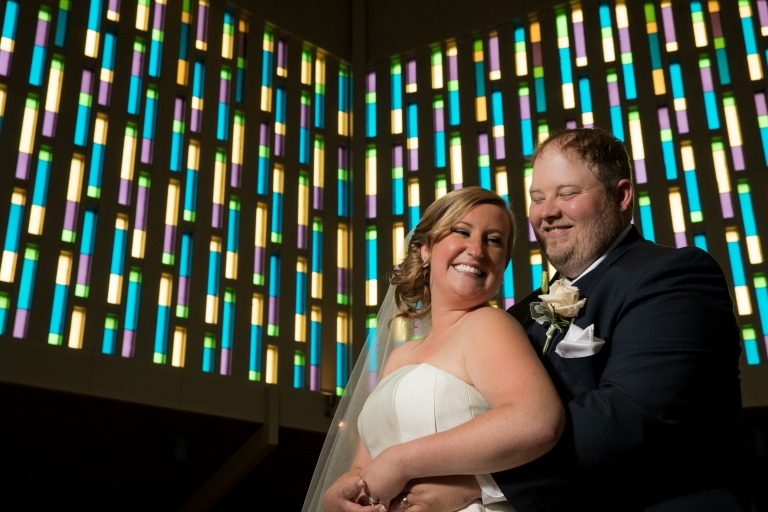 We are elated to share some of our favorite photographs from Andrea and Brad’s Wedding Ceremony at St. Martin of Tours and their Wedding Reception at the Crawford Auto Museum at the Cleveland History Center (Western Reserve Historical Society) in Cleveland, Ohio.  As I had mentioned in my previous blog post, we’ve know Andrea and her family FOR-EV-A and we just adore each and every one of them.  We already knew that this day was going to be special, but after getting to know Brad better during their engagement session, there was no doubt in our minds that their day was going to be SPECTACULAR!

Preparations began early in the morning at both Andrea’s parents’ home and at the house Andrea and Brad now call their own.  The weather was sublime for June in Cleveland which allowed us to take some fun family and group photos outdoors before heading over to St. Martin of Tours in Maple Heights.  Because Andrea’s family members have been long time parishioners at St. Martin’s and have very strong ties with both  Fr. Luigi Miola and The Most Reverend Roger W. Gries, O.S.B., who made a special appearance to witness and unite them in the the Sacrament of Matrimony.  Andrea and Brad’s ceremony was both extremely heartfelt and deeply personal.  After their beautiful ceremony concluded, the newly married couple exited to a “blizzard” of biodegradable confetti which made it appear as if it were snowing… again… on our photo session. Thankfully no actual snow fell that day!  🙂

We have to believe that the theme of this wedding must have been cars… cars… CARS!  As we had come to find out, Brad is really into rebuilding cars.  Heck, last we checked, their driveway has at least three vehicles he is currently rebuilding.  Andrea’s father Jim is also into restoring cars; however, his passion project is about one very special car in particular.  For this joyous and special occasion, Jim brought his prized 1930 Ford Model A to the church for an unique bridal photo opp. So cool!!!

Following a brief stop at Andrea’s parents’ house for some lunch, we headed out to the Cultural Gardens for bridal party photos.  After our session at Hungarian Gardens concluded, we decided to make our way to the Western Reserve Historical Society, but not before a ridiculously failed attempt to park the trolley by the Irish or Polish Gardens (I’d like to give credit to Chris for that – lol).  It was there at the WRHS where our creative juices REALLY started flowing!  We were able to craft so many dynamic images thanks in part to the unique spots we found throughout the museum and also to having such a phenomenal and easy going couple to work with.

Now here is where this couple’s awesome cars theme comes back into play:  As cocktail hour began, all of the guests we escorted downstairs to the Crawford Auto Museum for hors d’oeuvres, drinks and some great fun.  We brought our on-site photo printing equipment and the museum offered-up their Model T from the I Love Lucy Show.  Guests were lined up to grab a print of themselves hanging in out in one of the most historic and iconic cars in the world.  OMG!  What a hit!  But the fun didn’t stop there.  Family and friends packed the dance floor all night to the rocking sounds of Night Rhythm Entertainment.  Gotta say that we really didn’t know what a enormous fan of the Backstreet Boys Andrea was until that night and we’ve collectively never heard so many of their songs played at one wedding. lol

Andrea and Brad, you had such a wonderful wedding and we would just like to thank you again for trusting us to capture your precious memories.  I’ve got to say that there are so many amazing photos from throughout your day that it made it almost impossible to pick which ones to blog.  We hope that you LOVE these favorites from your wedding day as much as we do!

The Wedding Day Team of Professionals: